The Tudor Palace and Chapel Royal 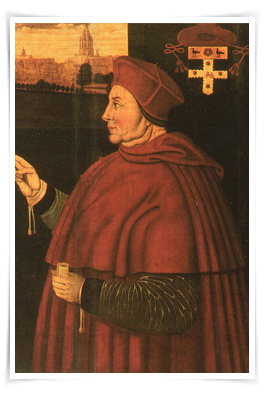 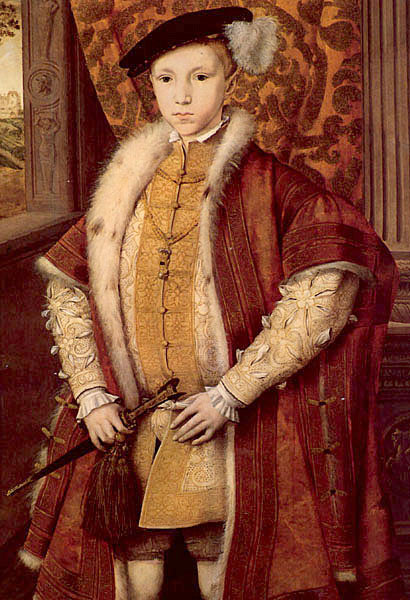 In 1514 the property (that is, the leasehold, but not the freehold) was acquired from Daubeny’s heir by Thomas Wolsey, Archbishop of York (Cardinal 1515 and Lord Chancellor, and, in 1518, Papal Legate a latere, outranking the Archbishop of Canterbury). Wolsey built a magnificent Renaissance Palace on the Italian model, and rebuilt the Chapel to its present dimensions. If you visit the Chapel Royal today, you see around you the Chapel which Wolsey built, but not a single brick or wooden fixture belonging to the period of his work on the building is now visible : it is all of later date, the ceiling from the time of King Henry VIII, the Baroque reredos and wall paintings and box pews and tiled floor from the beginning of the eighteenth century, and the regrettable pews in the ante-chapel from Victorian times. Ten years after completing his Palace Wolsey had to surrender it to Henry VIII, at about the time he fell from favour for failing to secure the annulment of the King’s marriage to Catherine of Aragon. In 1527 Wolsey was indicted on charges of præmunire (exercising a foreign jurisdiction in England as Papal Legate). He surrendered York Place to the King, which became Whitehall Palace (and burnt down in 1698, only the Banqueting House remaining intact). He was arrested for treason and died at Leicester Abbey (now Leicester Cathedral) on the 29th November 1530 while travelling from York to London for his trial. King Henry VIII, of course, was in a better position as Sovereign than any earlier leaseholder of Hampton Court to acquire the outright ownership of the Palace. He altered and enlarged Wolsey’s Palace, and made the Chapel into a Chapel Royal. The term Chapel Royal had always meant the body of priests and singers who followed the King of England wherever he went (including his forays into battle). It did not mean a building or buildings, but was the mobile religious establishment which looked after the spiritual needs of the King on his travels. The only time nowadays we see the Chapel Royal functioning in that historic way is at the Service of Remembrance once a year in November at the Cenotaph in Whitehall: The Queen is attended on that occasion by Her Majesty’s Chapel Royal: the Dean of the Chapel Royal, the Sub-Dean, the Serjeant of the Vestry, the Grooms of the Vestry, and the Gentlemen in Ordinary and the Children of the Chapel Royal, in short, ‘the priests and singers’ who accompany The Sovereign everywhere. King Henry VIII made a significant change here, redefining the Chapel Royal additionally as an institution located at Whitehall, St James’s, and Hampton Court Palaces, and the Tower of London. By the Ordinances of Eltham the King regulated the music of the Court and the Chapels Royal, and the most distinguished English composers of sacred music were Children and Gentlemen of the Chapel Royal: Tallis and Byrd in Tudor times, Orlando Gibbons in Jacobean and Purcell in Restoration times, to name but a few.² The musical tradition of the Chapel Royal and the great Cathedrals exercised a conservative and restraining influence on the course of the English Reformation which was without parallel on the Continent of Europe, and goes far to explain the dual character of the Church of England as Catholic and reformed.

On the 13th of October 1537 (the feast of the Translation of Saint Edward the Confessor) the longed-for son was born to Queen Jane Seymour in the Palace, and on the 15th he was baptised and confirmed in the Chapel Royal by Archbishop Cranmer, who was also his Godfather (his Godmother was his eldest sister The Princess Mary). The Queen died soon after that, and lay in state in the Chapel Royal for three weeks; her viscera were buried by order of the King beneath the altar of the Chapel Royal at Hampton Court Palace, and her body was buried at St George’s Chapel, Windsor Castle. Henry VIII was to be buried in the same grave at Windsor ten years later; and a hundred years after that, in 1649, the body and head of the Martyr King Charles I were interred in the same place.

The building of the Palace was complete in about 1540. The tennis courts and the tiltyard were built for recreation, and the parks surrounding the Palace were stocked with deer for hunting. Earlier leaseholders of Hampton Court when it was owned by the Knights Hospitaller had also found the hunting there excellent. The deer in Home Park and Bushy Park today, and Richmond Park, are of the bloodline introduced by Henry VIII into the Royal Parks of Windsor Forest. The outbreak of foot-and-mouth disease in south east England in recent years has been a matter of worry for the keepers of the deer; it would have been especially regrettable if such an ancient bloodline had had to be exterminated.

King Edward VI, Queen Mary I and Queen Elizabeth I often stayed at Hampton Court Palace but made few changes. While churches throughout England were stripped of their ornaments and stained glass and painted with limewash during the reign of the young King Edward VI, the young King himself continued to worship in all the late Gothic splendour and colour of the Chapel Royal which Wolsey and Henry VIII had built. This rather surprising anomaly may be due to reverence Edward held for his father, who had not long before built and adorned much of the Chapel Royal, with the result that he would not have presumed to have his work destroyed. The same is true at St George’s Chapel Windsor where a surprisingly large amount of medieval catholic iconography survives. What remained at Hampton Court throughout the Reformation period included a great window of stained glass containing portraits of saints such as the King’s patron saint, Saint Henry the Emperor,³ probably Saint Catherine of Alexandria and Saint Anne (the mother of the Blessed Virgin Mary), Saint Thomas Becket, the Archbishop of Canterbury martyred in 1170 during the reign of the Plantagenet King Henry II (Cardinal Wolsey’s patron saint), and the figures of King Henry VIII himself and his Queen, and Wolsey, at prayer beside their patron saints. King Henry VIII may have ordered Saint Anne to be substituted for Saint Catherine, and for Wolsey and Saint Thomas Becket to be removed from the window when Wolsey fell from favour and the King married Anne Boleyn. The glass had originally been designed for Wolsey by Erhard Schön of Nürnberg.

A degree of Royal ceremonial also survived the upheaval of the Reformation. King Henry VIII or Queen Elizabeth I, for example, when the Court was resident in the Palace, would attend Divine Service in the Holy Day Closets overlooking the main body of the Chapel Royal. Most of the Court could attend, and would stand or kneel on the floor in the chapel below. On about three occasions in the year the Sovereign would be houselled: he (or she, in the case of Queen Elizabeth) would be led by the Lord Great Chamberlain in solemn procession and in robes of state down from the Holy Day Closet to receive the Sacrament from the Dean of the Chapel Royal at the altar. Such an event would have been profoundly moving – and all the more so since the beautiful ornaments of the Chapel Royal, with crucifix, lights, and stained glass, remained intact. Courtiers were meant to be impressed, and so they were; but not all Christians in England thought as they did! Puritan rumblings voiced the objections to the ornaments and vestments used in Elizabeth’s Chapel Royal of those who wanted to push the Reformation much further in England. But Elizabeth and her successor the King of Scots would have none of it.

The chapel possesses a contemporary printed book of sermons preached by Lancelot Andrewes in the Chapel Royal in the presence of Queen Elizabeth and King James I. One of them was preached before Queen Elizabeth on the text “Remember Lot’s wife”, and the story goes that the Queen opened the window of the Holy day Closet to warn Dean Andrewes to be very careful in his choice of words on such a text addressed to his Queen!