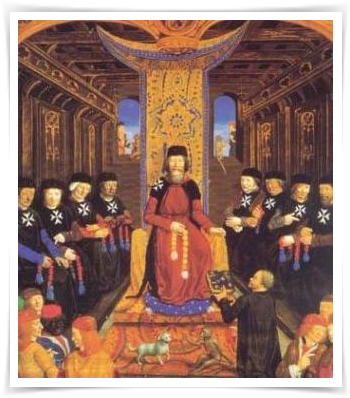 The site of the Palace was occupied from 1236 by the Knights Hospitaller of Saint John of Jerusalem under the direction of Clerkenwell Priory, the headquarters of the Order in England. The premises at Hampton included some residential buildings, farm buildings, and a chapel. Hampton Court had been a manor in the possession of Sir Walter de St Valery, according to the entry in the Domesday Book of 1086. He went on the First Crusade, and his grandson Reginald de St Valery donated the estate to the Military Order of the Knights Hospitaller.

I was interested to see, when I visited the museum at Clerkenwell Priory a few years ago, that one of the sisters of the Order was recorded as a nun of the Hampton religious community who was sent to join others at a new Hospitaller house at Buckland in Somerset. There were probably a few men and women religious at Hampton, and a staff of lay people to work the farm for the benefit of Clerkenwell and the mission of the Order in the Holy Land. The bell above the astronomical clock (which has only just been repaired) is the oldest existing artefact in Hampton Court Palace, and was cast in the 15th century and once hung over the Hospitallers’ chapel.

Some human remains found in Chapel Court, north of the present Chapel Royal, are probably those of the Hospitallers or those who worked for them. In the later Middle Ages the Hospitallers leased the Hampton buildings and land, still called Hampton Court, to various private landowners. It developed into a manor house, about which tantalisingly little is known for certain. King Henry VII is known to have stayed there when the lease (but not the freehold) was held by Giles Daubeny, Lord Daubeny, the Lord Chamberlain during the reign of the first of the Tudors.