Applications are currently open for our Gordon Reynolds Organ Scholarship. The scholarship is primarily intended for an organ student wishing to gain experience in choral accompaniment, choir training and organ playing before or during their university/conservatoire course. Please click the link below to see more information:

An organ was commissioned in 1690 from the royal organ-maker, Bernard Smith, and was built, but unfortunately was destroyed by fire before it could be installed. Eventually, a replacement was built and installed by Smith’s son-in-law and successor, Christopher Schrider, in 1711-12 for the sum of £800. The case is believed to be by Grinling Gibbons, and its historical importance was recognised in 2014 with the award of a British Institute of Organ Studies’ Historic Organ Certificate Grade 2* which denotes particularly important organs of more than special interest. The instrument was enlarged during the 19th century by William Hill who incorporated the majority of Schrider’s pipework, and substantially altered by others in the 20th century (J W Walker & Sons 1957 and 1972; Hill, Norman & Beard 1978, 1985 and 1993). Harrison & Harrison Ltd overhauled the organ in 2013 and provided new electro-pneumatic key actions and transmission. In addition, the tonal scheme was revised and the size of the organ reduced in order to re-capture the musical character which had been established by Hill. 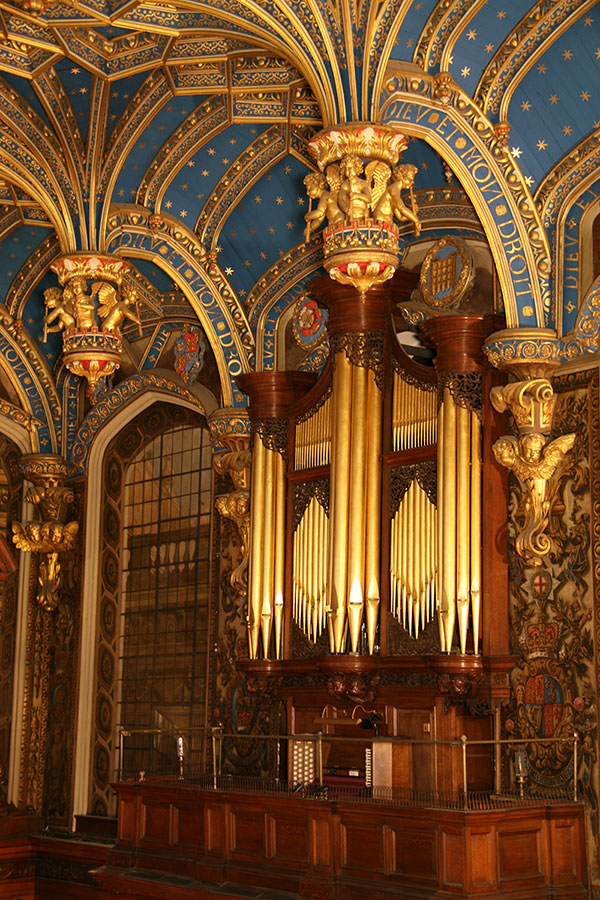 Our knowledge of the organs in Hampton Court’s Chapel appears to date from 1523 when ‘a grete paire of Organs’ was provided for Thomas Wolsey – in all probability for the Chapel itself, as well as two smaller pairs. When Henry VIII took Hampton Court Palace from Wolsey six years later, part of the work carried out for him in the Chapel in the following years included the provision of an organ by John Bytton (or Beton). It was brought upstream from Bridewell [near Blackfriars, London] in May 1538, and installed in the recently-constructed loft. Records of payments for repair and maintenance in the following years survive, but by 1636 the organ had to be rebuilt, and Edmund Norgate was paid £140 for alterations, repairs and for making a new ‘chair’ organ “conformable to those allreadie made in our Royall Chapell at Whitehall and Greenwich”. He may, as was then usual, have subcontracted the work, because John Burward was paid in 1638 for making the chair organ and “altering the great organ with the sound board and conveyances thereof”. By 1644 though, the organ was removed by the Puritan Sir Richard Harley.

Some time after 1654 during the Protectorate, Oliver Cromwell had what some writers describe as two organs installed in the Great Hall, or it may simply have been a double organ. Certainly, a double organ came from Magdalen College, Oxford, and was placed in the gallery of the Great Hall where it was reputedly played by John Milton. This organ, built by Robert Dallam in 1631, was re-acquired by the College in 1660 and re-erected there a year later. It was substantially re-modelled by Renatus Harris in 1690, and its great organ eventually sold to Tewkesbury Abbey in 1736, where the case of this division survives. This instrument has always been known at Tewkesbury as the Milton organ and, now considerably enlarged, was completely rebuilt by Kenneth Jones and Associates in 1997. In the same year as the removal of the great organ to Tewkesbury, the chair organ was acquired by the local squire of the Northamptonshire hamlet of Stanford on Avon, Sir Thomas Cave, and rebuilt in St Nicholas Church.

The Restoration saw the return of Charles II in 1660, and with Hampton Court being chosen as the venue for his marriage to Catherine of Braganza in 1662, preparations were soon under way. Simon Thurley writes that a new organ loft was built in the Chapel with steps up to it (for which John Hingston provided a crimson taffeta curtain), and part of an existing organ casing was re-used from the Great Hall to make its frontal. Hingston was certainly paid that same year “for erecting an Organ in the Banquetting house at Whitehall and afterwards removing it to the Chappell at Hampton Court”.

With the accession to the throne of William III and Mary II in 1689, Sir Christopher Wren was commissioned to rebuild Hampton Court. A year later, the Lord Chamberlain wrote the following to the Royal organ maker ‘Father’ Bernard Smith: “The Deane of His Mats Chappell Royall hath acquainted me that there is wanting a New Organ in the Chappell at Hampton Court. These are therefore to require you forthwith to cause a new organ to be made and put up there.” The organ was quickly built, but in view of the building work at the Palace, it was stored in the Roman Catholic chapel at Whitehall Palace for safekeeping. Unfortunately, it was destroyed in the fire there of 1698.

Bernard Smith died in 1708, so his son-in-law, Christopher Shrider, was commissioned in 1710 to build a new organ of two manuals and thirteen stops. He completed it two years later, and nearly all of its pipework forms a substantial part of the great and choir divisions of the instrument in the Chapel today – all still in the original case probably carved by Grinling Gibbons.

From the reign of George III onwards, Hampton Court ceased to be a royal residence and the Chapel was much neglected for around a hundred years. In 1840, William Hill, who had found the organ “very much out of tune & in bad order… not fit for service”, added a short-compass five-stop swell organ to Shrider’s instrument and made a new bellows. It is reported that he removed Shrider’s Cornet from the great, but as this division also had a Sesquialtera, it is possible that he merely combined two split-compass stops to form a full-compass mixture. By 1857 he had rebuilt the organ again, making further tonal additions to all three manual divisions and providing a pedal stop. From 1899 to 1901, this division was enlarged, the great and choir organs rebuilt, and a hydraulic engine to blow the instrument installed.

The organ appears to have survived unaltered for just over fifty years, though it was dismantled at the start of the Second World War by William Hill & Son and Norman & Beard Ltd and stored in the riding school of a Buckinghamshire mansion. It was reassembled at the beginning of 1946, and the completion of the work was marked by a concert on 27 March that year. Ten years later though, a number of tonal and mechanical issues had emerged, and Hill, Norman & Beard submitted a proposal to the Lord Chamberlain’s Office to attend to them. In the event, the work was entrusted to J W Walker in 1957 when the swell organ’s heavy and apparently troublesome tracker action was converted to tubular-pneumatic operation. Walker’s rebuilt the organ again in 1972, and the entire action was made electro-pneumatic.

Whilst the organ had travelled a little way from its origins already, the twenty-odd years between 1972 and 1993 saw the unity and integrity of the early pipework being submerged by what might have been seen as fashionable additions, but which were, in reality, alien voices.

The 1993 rebuild and enlargement of the organ by Hill, Norman & Beard, underlined the desire to turn away from the antecedents of the organ in favour an eclectic specification. Whilst the technical side of the instrument could be lived with, with the exception of the key action, it was the musical personality of the organ which was its downfall, and only a few years later significant concerns were raised over the organ’s ability to accompany the choir and congregation in the chapel. Following a report by organ consultant Ian Bell, in 2002, the stage was set for a very different approach to any future work on the organ.

The gradual enlargement of the organ, over some years, had all but buried the character of the instrument as left by Hill.

Chris Batchelor, Managing Director of Harrison & Harrison from 2011 to 2017 describes the work carried out:

The key focus of our work in 2013 was to reduce the size of the organ and retrieve the tonal character of the instrument. Alongside this critical work, we dealt with a number of long-standing technical issues both at the console and throughout the organ as a whole.

Fortunately, Hampton Court Palace has a fascinating organ store, in which parts of the organ, removed over the years, have been retained, and this was to prove a valuable resource in terms of our intentions.

On the tonal front, changes were undertaken on all divisions:

• The Hill Great Bourdon 16ft was retrieved from the store and re-instated on new chests.

• The Hill Great Trumpet 8ft was revoiced (retaining the original tongues) and re-instated on the main slider chest.

• The Hill Dulciana 8ft was removed from the Great and re-instated on the Choir slider chest.

• The Choir Clarinet 8ft (a 1993 stop) now extends to bottom A sharp only, as the bass, previously on a separate unit, has been removed.

• The speech of the Swell Horn 8ft was revised and the tone quality opened up. This was achieved by removing half caps and excessive loading installed in 1993.

• The Pedal Open Diapason 16ft, Bourdon 16ft and Bass Flute 8ft were all returned to their original higher pressures, and metal plates (dating from 1991) which had lowered the cut-ups were removed.

• The tone quality of the Pedal Trombone was restored by removing excessive loading and recurving the tongues.

• The most significant work to the gallery console entailed reworking the jambs to reflect the smaller specification. The original Hill drawstops were retrieved from the store and returned to use. The removal of the downstairs console enabled the swell pedal mechanism to be returned to mechanical operation.

• The soundboards were opened up and cleaned and the springs reset.

• Much of the earlier wind system was retained, and adaptations were undertaken to accommodate the new actions.

• No work was undertaken on the case or front pipes.

We are very pleased to have had the opportunity to restore the musical personality of this important instrument, and to make significant improvements to its technical performance. Whilst the organ underwent much revision, especially during the late 20th century, we hope that a long period of stability now lies ahead and that the instrument regains the affection of all those who hear and play it.

The specification can be downloaded by clicking here. 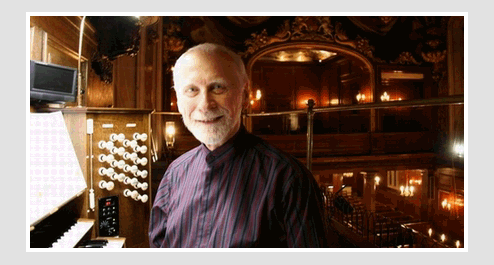 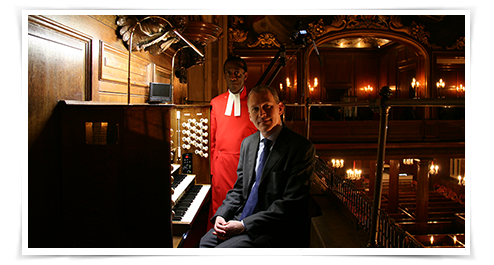 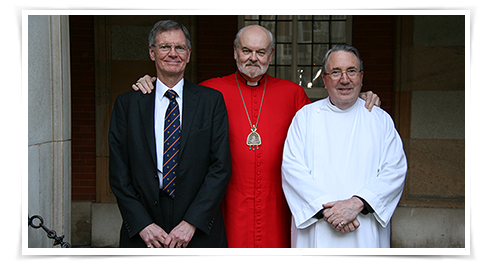 As Patron of the Chapel Royal Choral Foundation I am delighted that this important milestone has been reached and with such success. The overhaul of the organ and the restoration of the historic integrity of this beautiful instrument were among the main reasons for setting up the Choral Foundation, and everyone who has been involved in the work should be proud of this achievement.