The Chapel Royal in Modern Times 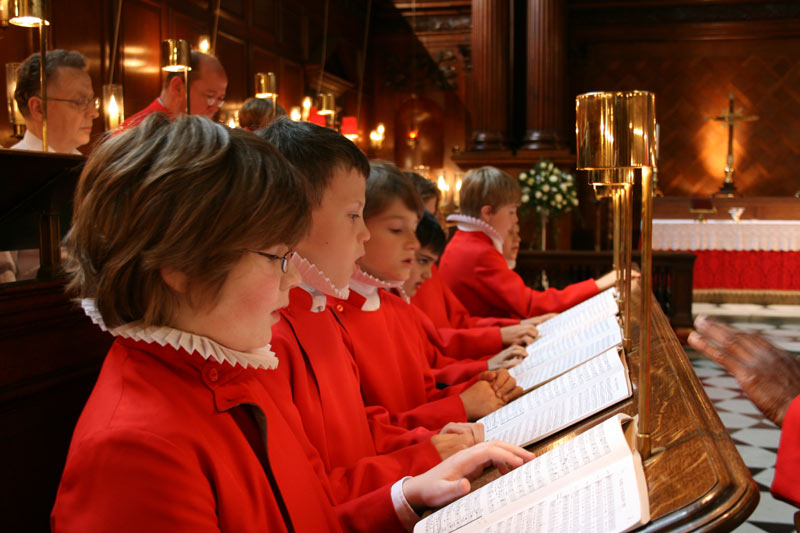 Queen Victoria opened the Palace and its grounds to the public in 1838. A lot of restoration work was undertaken, and some of the buildings returned to their original Tudor appearance. The management of it all was the responsibility of the Royal Household under the direction of the Lord Chamberlain. That remained the case until the 1960s, when the upkeep of the Palace was entrusted to the Department of Ancient Monuments and Historic Buildings. Later the task was undertaken by the Ministry of Public Buildings and Works, and then by the Department of the Environment. Finally, in 1989, Hampton Court Palace and a group of other historic Royal residences were handed over to a charitable trust, called Historic Royal Palaces, which maintains them now.

The choral tradition in the Chapel Royal, which had lapsed after the Court left the Palace in 1737, was revived in the ninetheenth century, and since then a permanent Chaplain and Director of Music have been appointed by the Sovereign. The Chapel Royal is the only part of the Palace which is still administered by the Royal Household: its Ordinary is The Queen, and its ecclesiastical Ordinary is the Dean of the Chapel Royal, at present an ex officio post of the Bishop of London, to which he is appointed by The Queen.

In May 2004 The Queen and The Duke of Edinburgh celebrated the four hundredth anniversary of the Hampton Court Conference at a service in the Chapel Royal which was attended by Her Majesty’s College of Chaplains as well as by the entire Chapel Royal establishment. That was probably the first time The Sovereign has worshipped at a service in the Chapel Royal since George II withdrew the Court from the Palace after the death of Queen Caroline in 1737. To commemorate the occasion a pulpit fall of brown oak, inlaid with the Hospitaller Cross in white sycamore and the Royal Cyphers of James I and Her Majesty The Queen, was made for the Chapel Royal under the direction of The Queen’s nephew Viscount Linley.

Next to the pulpit stands a fine Ethiopian cross used as a processional cross in the Chapel Royal. It was presented to the chapel by Father Nessibu of the Ethiopian Orthodox Church in 1968, when he was Chaplain to the Imperial Family in Addis Ababa. The design is a traditional Ethiopian “Net of Solomon”, and you can imagine how, if it were not made of solid gilded bronze, it could be folded in upon itself towards the centre, trapping any demons flying nearby like catching insects in a net. Those who worship at the Chapel Royal do not do so as of right (as they would in a parish church), but by invitation of The Queen. Her Majesty, and the Dean of the Chapel Royal, who is the ecclesiastical Ordinary, are represented by one of the Canons of the Chapels Royal, who is the Chaplain here appointed by The Queen. Once run by a staff of forty chaplains in Tudor times, the Chapel Royal now has one. There are usually two choral services on Sundays and on important Holy Days, as well as celebrations of the Eucharist during the week. Visitors are welcome to see the beautiful and historic Chapel Royal when services are not in progress, and stewards, who are regular worshippers, present its history and its continuing ministry to all who are interested. The Sacrament is permanently reserved as a focus for prayer and devotion and for the Communion of the sick.

The Palace and the Chapel Royal are not always the same as before, and there is something new to see and learn on every visit. In 2009, for instance, the Palace commemorated the five hundredth anniversary of the accession of King Henry VIII to the throne of England with special exhibitions and lectures. On the 12th of September 2009 the first Royal Marriage for centuries was solemnised in the Chapel Royal between Lord and Lady Frederick Windsor: Lord Frederick is the son of Their Royal Highnesses Prince and Princess Michael of Kent. In December 2010, to mark the forthcoming 400th anniversary of the King James Bible, the Queen’s Christmas message was broadcast from the Chapel. And in June 2017, the Chapel became that of the Order of Companions of Honour, which celebrated the centenary of Order’s foundation with Choral Evensong in the presence of Her Majesty and the Duke of Edinburgh and many members of that Order.